The time had finally come – the flexword teams all got together in one location! Skype, chat and e-mails were given a break, all forces were now joined face-to-face.

The teams of flexword Translators & Consultants are spread over 4 locations: Germany, Great Britain, the USA and Serbia. Novi Sad in Serbia was chosen as the meeting point for around 40 members of staff to get to know each other personally, to share their experiences and, most importantly, to have lots of fun.

And how did it all go?

The first to arrive was our colleague from the USA, who immediately felt at home in Novi Sad, it was as if he was born here. Gradually, all the others arrived: our lovely colleagues from London, who were able to explore the streets of Belgrade, and last but not least, the cheerful team from Germany, who didn’t know where they were at first: thick fog lay over Vojvodina as they all landed late at night, so none of the road signs were visible all the way to the hotel! But the following morning, it was clear: we were in the right place! After breakfast, everyone went straight to flexword’s office in Novi Sad, and this is where the excitement began. All of a sudden, more than three dozen people were standing in the entrance, some even greeted the same person twice, and there was a lot of enthusiasm and eagerness – ultimately, everyone knew each other already at least through video conferences, but meeting up face-to-face is something else. You could hear at least three languages being spoken at the same time, with Serbian slowly getting quieter and English prevailing. The euphoria also reached its first high. There was so much to talk about, but no-one knew where to begin? If in doubt, a smile says more than a thousand words.

Goranka and Werner had a surprise ready for us – the short flexword film that was made in Novi Sad in June 2017. The film turned out very well and those of us who appeared in the film all agreed: we were made for the camera. We hope that it doesn’t take another 25 years to make the next film recording.

The next stop was to Sremski Karlovci, one of Serbia’s oldest and most well-known small towns. Our lovely colleague Jelena gave us a brief introduction of the town’s history and familiarised us with the places of interest. This was also where we had our wine tasting experience with wines from the grapevines cultivated in Vojvodina. Already during the tasting, the laughs got louder and the discussions became more in-depth so that we suddenly knew each other really well! After four small glasses of different wines, the day’s programme continued. At the foot of the Petrovaradin fortress, we had to go through the so-called catacombs. Everyone was ready and no-one was afraid to go through the very narrow and dark passages (it seems wine gives you courage), and so the journey began. We walked through a labyrinth of low, narrow tunnels. It was dark so everyone turned on their phone lights and walked close together, one behind the other. The only way was to go forwards. The tour guide told his story very enthusiastically, no-one understood him (not even us Serbians), and I (Bilja) also quickly stopped my attempts at interpreting. We were pushing forwards and getting stuck, down we went over dilapidated steps, start – stop – start – stop. Milica carefully documented the whole thing on her camera and touched every bat she encountered on the way. During a quick break, Werner decided to talk about a customer, 8 levels below ground, but the girls unanimously shouted “NOOOOO!” While a colleague had a brief panic attack, Vladimir simply took selfies with Roberta and Milica, and a few colleagues began singing a German song – all of this taking place several levels below ground in a kilometre-long tunnel system. Once we surfaced from the catacombs, as dusty as we were, we had the feeling that we knew each other much better.

Afterwards, our visit took us to the wonderful Hotel Leopold I, which is situated high up on the Petrovaradin fortress (not below this time). Here, we enjoyed the refreshments of Serbian food and drink. Our foreign colleagues asked what everything was, to which we answered: kulen, kajmak, ajvar, pečena ljuta paprika, kompot, etc.

After the fortress and a visit to the old part of Novi Sad, we all went to get ready for the party on the well-known fishing island of Ribarsko Ostrvo. Everyone was now really relaxed and ready for the big party with food and music. We hadn’t even finished the first course when everyone got up to sing and dance. Those who were ill were suddenly fit and healthy, anyone who was tired became lively, and those who were shy talked non-stop. Goranka requested kolo, the typical Serbian folk dance, and the good mood became infectious. Practically everyone joined in for the folk dance. The steps required a bit of practice, but everyone was dancing kolo! Markus and Milica took the lead on the dancefloor. Anas loved all the songs. Marko sang on the microphone, while Nataša mastered the typical kolo yodel-like chant perfectly (exactly as to be expected!) and made everyone jump. Kornelia was the Queen of the Latin rhythm, while Svetlana was the Queen of every rhythm. Everyone had a fantastic time that night!

I can’t write anything about the after-party because I wasn’t there, but I heard that Emma managed to get her “Dva Piva” (Serbian for two beers). All we were told was that they ended up at a private student party, but Marko managed to get them in thanks to his excellent managerial skills.

The following morning, everyone bravely made it to breakfast. We were full of new impressions and it was difficult to say goodbye. No-one can take these memories away from us and we hope to meet up again soon. Especially because everything works so well in the company! 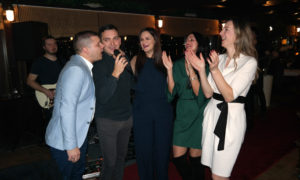 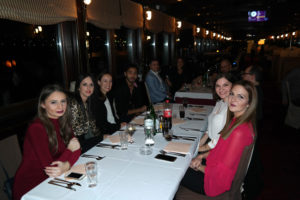 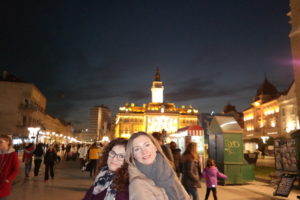 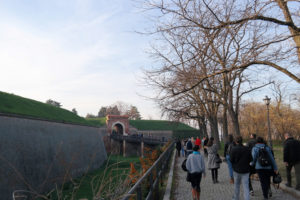 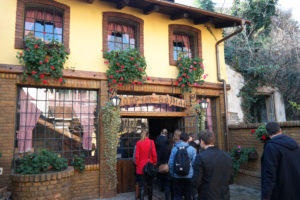 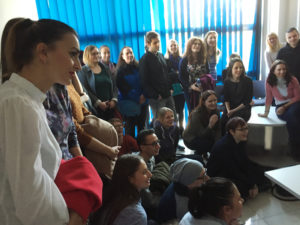 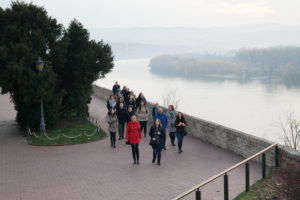